Life and growing up

Audre Lorde was born in 1934 in Harlem, New York City. She was the youngest of three daughters, and lived in an extremely strict, Catholic household. A lot of that structure was thought to have increased her ambition and drive later on in life. She grew up very apart from her family which drove her to excel in academics. When she graduated from high school, she went off to study at Hunter College, but quickly dropped out and traveled to Mexico and had short, and formative relationships with other women which allowed her to explore herself more as a lesbian. She went back to New York later in life and explored heterosexual relationships and finally married Ed Rollins in 1962, a Caucasian and gay lawyer. They had two children together and then divorced 8 years later. Later on in life she met Frances Clayton and had a long standing relationship with him, although it was more of an open relationship where she was free to be declared an open lesbian. They raised her two children together and settled in a nice open-spaced home in Manhattan.

Although they had more space, they were subject to a large amount of public ridicule for their lifestyle and her race. In that season of her life she wrote, “And of course I am afraid, because the transformation of silence into language and action is an act of self-revelation, and that always seems fraught with danger.” (42. Sister Outsider) She began to write more in this influential time of her life, focusing on three main points in her feminism; the erotic, power, and poetry. As she became more aware of the social issues, she wrote in her book, “For we have been socialized to respect fear more than out own needs for language and definition, and while we wait in silence for that final luxural of fearlessness, the weight of that silence will choke us.” (44. Sister Outsider.) She became the leader in feminism for younger generation and with her published works she was able to provide several main pillars for feministic beliefs.

The inspiration of what got Audre Lorde to first start writing was the influence by her mother’s “special relationship with words.” (Trapasso, 1197) Most of her mother’s special bond rubbed off on Audre by her appreciating poetry a little bit more. This was first displayed  by Lorde when she was just growing up and when her mother would ask how she felt, she replied with a small poem. While she was learning to read and write by her mother at age four, she discovered that she didn’t like the spelling of her original name “audrey” because of the shape of the “y” because it sloped down. (Trapasso, 1997) Her name change was as major jump start of her writing ambition because it gave her the chance to reveal the importance of name changing and self-definition to that would later develop in her writing by creating scenarios and characters. She wrote her first poem in the eighth grade and it was about her rebelliousness towards her parents strict rules that they laid down on her. While she was still in high school, “Seventeen” magazine

picked out her first love poem and published it. (Trapasso, 1997)

Works of poetry throughout her life

In her first volume of poetry “The First Cities” (1968) was known for being a delightful and innovative departure from the constant slander of African American poetry at the time. (Albany Times Article, 1993) The first volume was described as being a quiet, introspective book,” that mainly focused on relationships and feelings within those partnerships. Her second volume that she published  named “Cables of Rage” (1970) was a compilation of poems that followed the themes of betrayal, love, birth, and the transience and existence of human love and betrayal. (Albany Times Article, 1993) As she was still writing for her next compilation of poems, Lorde received a Creative Artists Public Service Grant in 1972. Just merely a year later, the third volume was released cal 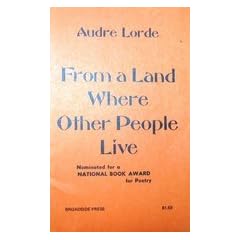 led “From A Land Where Other People Live” (1973). The release of this volume was so groundbreaking that it was nominated for a National Book Award for portraying a quiet anger view of global injustice and oppression. “New York Head Shop and Museum” (1974) was Lorde’s fourth volume that was taken from the perspective of a city civilian in New York that displays what it’s like to be a black woman, and a mother.(Albany Times Article, 1993) Audre Lorde’s compilation volume “Coal” was a combination of her first two volumes and would soon to be one of  the first to get recognized and published by big publisher W. W. Norton. By the recognition of W. W. Norton, Lorde’s writing would soon bloom as it would bring her work to a broader audience.

She had a very powerful message in her poem titled,  “Power”, which critiqued the way that the judicial system runs in a discriminatory fashion with cutting words. Phrases like, “They convinced me” meaning they had dragged her 4’10” black Woman’s frame over the hot coals of four centuries of white male approval” (Lorde, Power.) Helped to increase the imagery in a precise manner and pinpoint the wrongdoings in society in that day and age. Her poetry was famous for creating a social stir, and was therefore the reason why she was awarded the Creative Artists Public Service grant, The Broadside Poets Award, The Woman of the year Award, and many others. Some of her most influential writings come from the books she had published in her later years, such as Sister Outsider, Zami: A New Spelling of My Name, A Burst of Light: Essays, and many others.

Summary of a great woman

Lorde expressed her vision through poetry whether it was through pain, or expressing passionate love. She has made a huge impact in many people’s lives especially when it came about sexuality. Learning how to embrace who she was, and being at peace with herself has been a journey for her, but overcoming that journey made her an inspiration towards others. Informing of empowering her readers to be aware about the prejudice convictions in their everyday lives. How she communicated with her readers was through the feeling of her poetry. Every beautiful poem that that was read by her, it would always have a meaning behind it. Especially when it came to being diagnosed with breast cancer. Explaining the possibility of death but having faith to overcome any obstacle that she had. Lorde’s message was reason for celebration and growth. The experiences that she had made her who she was. By having that motivation to speak up and bring it as an attention to all women who could relate to her story was a powerful movement through her poems.

We can all learn something from Audre Lorde. Lorde had encouragement to changed the way what people thought of things, whether being a woman of color, or seeking for peace when it came to homosexuality. The message that Lorde was taken place was being proud who you are and being aware of not having the equality than others. It was a major issue that she would address throughout her poetry and to save a lot of people’s lives because of the insecurities people might have had or the depression of not finding help. Lorde made it clear that people are not alone. People who know about Lorde and her story, respect her and her guidance of poetry especially by being a black African-American lesbian. She was a hero for many, and expressed her feelings by the way she looked at society. Lorde never took the word “no” for an answer. There are many positive words that can describe her but the one that spoke out the most was her being incredibly passionate in what she was doing. A lot of people did not know what she was doing behind her poems. Lorde was very expressive when it came to her poetry. When she was little, when her mother would ask her ‘how she was feeling?’, she would simply reply with a poem that she couldn’t merely just express in ordinary words. By her doing this type of behavior when she was little, she would soon draw a lot attention to herself by her expressing her creativity by having it seem natural. If her mother asked her how was she feeling, she would simply reply give an uplifting poem. It brought a lot of attention because she expressed herself differently.  Audre Lorde was an inspiration to many through not only her writing but her attitude as well, she will forever have an impact on so many lives.